I’m loitering around Derby bus station, watching the plethora of TrentBarton’s rainbow of brands bringing people into, and taking them away from, this East Midlands City.

The plan is to ride the TransPeak service across England’s green and pleasant land to the great northern powerhouse of Manchester. I’m struck with irony that TrentBarton’s Red Arrow glorious beasts – high spec brand new coaches that wouldn’t be out of place on a trek across Europe – will whisk their passengers to Nottingham in little more than half an hour to nearby Nottingham, whilst I will spend the next three hours on a service bus to my illustrious destination.

At stand 21, four takers are awaiting the TransPeak. It rolls in, looking rather glamorous in it’s green livery as our driver beckons us on.

TransPeak is operated by High Peak Buses – a joint venture between the aforementioned TrentBarton’s parent Wellglade and CentreBus. The “TP” service is basically hourly from Derby to Buxton, but extends 4 times per day to Manchester.

a single from Derby to Manchester is £8

It’s an impressive welcome. Our friendly driver tells me it’s £8 single for the trip to Manchester, sorts me out quickly and efficiently, and I take my seat on the offside, near the emergency exit (where, for someone 6’7” like me, extra legroom can be a Godsend). My fellow gaggle of passengers choose their spots; a girl with a suitcase and a guy with a pair of the biggest headphones I’ve ever seen. He’s asleep within seconds.

The bus itself is very well-appointed. There’s a wood-laminate effect floor and super-comfortable green/black leather seats. Wifi is available (and it works), as well as USB charging points lurking under the seats in front. There’s no audio/visual announcements though. 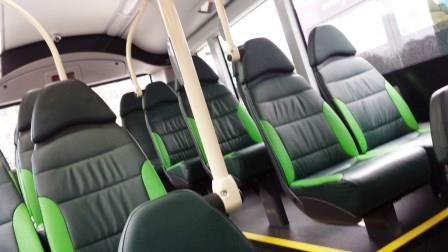 The seats on Transpeak’s Enviro 200 vehicles are well-appointed!

We’re off spot on time. I’m constantly impressed at the amount of reversing movements out of the stands at Derby bus station. Drivers must have telepathic skills as you never know what is appearing backwards from behind a stationary vehicle.

Into the gloomy grey skies of a typical Derby January morning. Suitcase girl optimistically tries to put make up on, then thinks better of it as the stop-start traffic isn’t the best environment in which to carry out such a process.

Soon out of the City Centre, we pass through attractive Duffield, then wind our way towards Belper, where a man with a giant fishing rod almost hooks us at speed. Without a flap, we’re soon at what looks like a small bus garage, masquerading as a bus station. This is listed in the timetable as “TrentBarton Bus Garage”. Here, three people join us and we swiftly leave, our driver waving at a TrentBarton bus, whose driver has kindly let us out into the traffic.

We push on, through Ambergate and a sign telling us it’s 53 miles to Manchester. Our man in headphones isn’t remotely interested in the view – he’s pumping up the volume with his huge headphones and most definitely out for the count.

The rain has begun to fall as we follow the path of the River Derwent immediately to our left, and soon we’re into the tourist magnet of Matlock. I make a mental note to return here in more clement weather. Not many tourists today for this pretty part of Derbyshire.

At Matlock Rail Station, there is a small bus station. It’s also very quiet here, and as we’re a few minutes early, our driver awaits time. The only other vehicle here is one bearing the name Hulleys of Baslow – a firm that has always fascinated me as I had a book about the firm as a child, and they were one of only a handful of companies that bought Midland Red buses second-hand, including some S6 models in the 1960s. I’ve never actually caught a Hulleys service, so more mental notes are recorded to return here and put that right!

Our TransPeak service is beginning to fill up and we continue northwards, weaving our way through ancient highways, past stone-clad houses, wintery fields and the obligatory garden centre. TrentBarton’s bright yellow “theSixes” buses are in front of us, and passing in the opposite direction.

Then we’re out into the real rugged landscape of the Peak District, now following the River Wye on our right. Next up is the delightful town of Bakewell. Our bus stops to collect more travellers opposite the “Bakewell Deli”, with “puddings and tarts” for sale in the window. I momentarily consider asking our driver to wait as I submit to my sweet tooth, but think of my bathroom scales and ever-expanding waistline before thinking better of it. But if I return to ride some Hulleys services in the summer, I can’t guarantee I’ll have the same willpower.

Transpeak stops opposite the Bakewell Deli – perfect for tarts!

Soon we take a sharp right off the beaten track and our Enviro 200 makes easy meat of the incline into the ridiculously pretty Ashford-in-the-Water, which could easily appear in some period drama. A woman in an ornate stone bus shelter shakes her head to indicate she doesn’t want our TransPeak, but our driver stops anyway, opens the doors and bids her a good morning. It’s all very civilized.

The wind is picking up. It’s the remnants of “Storm Jonas”, which has brought chaos to parts of America. It’s also brought chaos to our next passenger’s hair as she emerges from another shelter that hasn’t done too much sheltering to flag us down. Our driver offers scant commiserations and hands her her concessionary pass ticket and awaits her to be seated. The topic of conversation between her and fellow travellers is now, of course, the weather. I’m tempted to join in, given my plan to take views of the scenery from the bus window has been thwarted by the wind and rain now lashing our vehicle.

But the journey is at least “atmospheric” as we meander past barns and ancient stone walls before our rural scene gives way to civilisation in the form of Buxton.

Buxton is larger than I thought. It’s bustling, despite the weather. Here we exchange most of our travellers for new ones, sporting the morning’s shopping. Most of them seem like regulars and the topic of the weather again echoes around our bus.

Next, we’re exchanging our driver for a new lady model. We’re at Dove Holes, home to High Peak Buses and base of our TransPeak bus. Pleasantries are exchanged and mutual waving takes place between our drivers and the occupant of the driving seat of a “Skyline 199” who has arrived from the opposite direction – Manchester Airport. I decide to take in some music, and Shirley Bassey wails “Goldfinger” from deep inside my mp3 player.

On towards the big City we head, passing pubs with delightful names such as “Dandy Cock” and “Soldier Dick” a the stunning scenery gradually gives way to suburbia in the form of a sign for Stockport and the first glimpse of a Greater Manchester bus stop.

Soon we hit Hazel Grove, where Stagecoach have instigated a Park & Ride using their super-frequent 192 service to the City Centre. From now on, the rest of the journey is punctuated almost consistently by Stagecoach 192s and I wonder just what the peak vehicle requirement might be for this service!

Through Stockport itself we pass, as the giant railway viaduct looks down on the bus station below. The calm serenity of the highways and byways of the Peak District is replaced brutally by the suburban throb of huge amounts of traffic. We pass the McVities factory on the left and the O2 Apollo on the right. The TransPeak is now a limited stop service and we don’t have any takers or leavers as we head inbound towards the metropolis.

And, three minutes early, we pull into Chorlton Street Coach Station in the centre of Manchester, where we rub shoulders with National Express coaches heading off in all directions across the country. Our driver thanks us all as we leave, and I almost expect a hat to have gone around – the TransPeak seems more like a day trip than a bus service.  Our Enviro 200 has performed excellently, both in the windswept country lanes and demanding City Centre enviromnments.

Outside the rain has stopped but the wind buffets the great northern powerhouse. I go in search of barm cakes whilst, just 25 minutes later, our TransPeak leaves for another run across the beautiful Peak District back to Derby. This truly is a Great British Bus Journey. 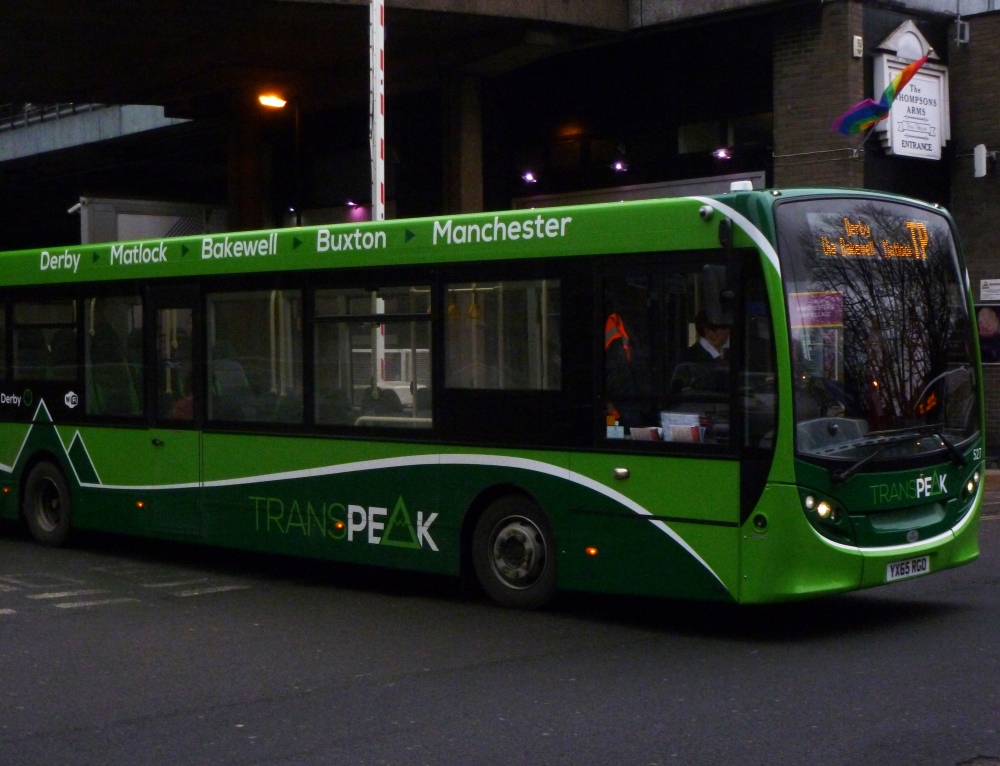 The TransPeak evolved from the 252 Nottingham – Manchester service, started in 1985, jointly operated by Trent & Ribble. Ribble’s share soon disappeared at deregulation barely a year later, but Trent kept at it, converting it to “TransPeak” in the early 1990s.

The route number 252 was chosen because it was similar to National Express’ 952, which ran from Nottingham to Manchester (then on to Blackpool) via Mansfield, which originated from a joint Trent / North Western express service. The stretch of the TP from Derby – Matlock was originally Trent / North Western’s 4 service.

The original Derby-Manchester service was the Trent / North Western X1 via Ashbourne. This became the 201 in National Bus Company days (though Beresford competed as X1 in the early 80s with ex Green Line RP AEC Reliances) becoming a tendered service at deregulation, initially operated by Shearings and latter GMS (with Charterline coaches) before its demise.