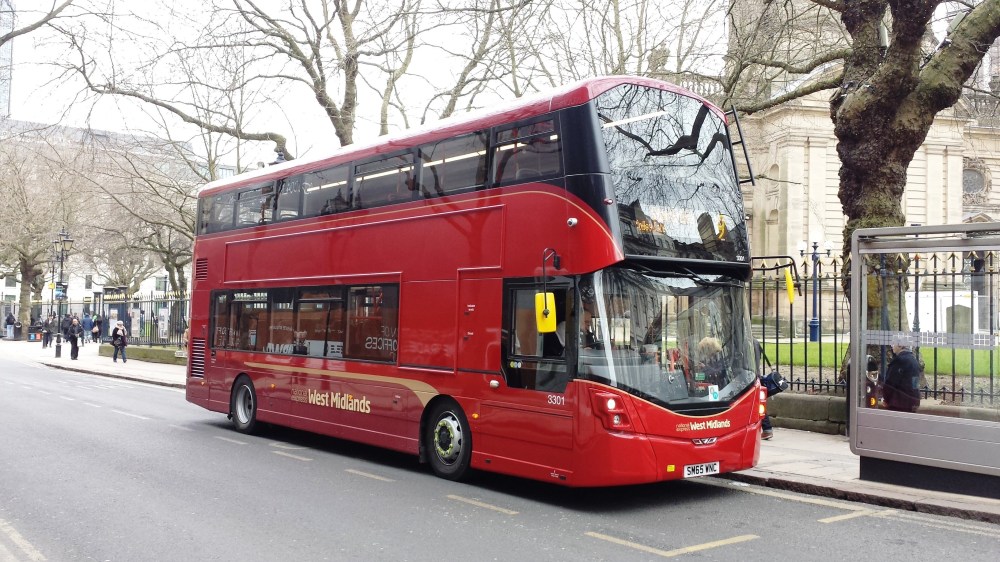 Perusing my copy of Coach & Bus Week whilst actually on a bus set me off on another deep and meaningful ponder of the state of the industry at the moment.

One of the news items referred to National Express Group – and the fact that strong overall growth has offset a “slowdown” in it’s bus division. National Express West Midlands is my local operator, and I use it and watch it’s fortunes closely.

NXWM has had an uplift in recent years. The driving skills are much improved, the buses look more attractive in their gorgeous crimson livery, a new “Platinum” product has been rolled out, brand-awareness is much-improved, and new fare offers have been introduced (although at the danger of becoming confusing due to the sheer number of alternatives).

So what’s the fuss? Commercial revenue is up 2%, but offset by an expected decline in concessionary income to balance out at 0.1% growth overall. It all feels a bit, well, flat – if figures like that are your thing. On the buses themselves as a passenger, it feels probably the best it has in many a year.

But here’s the rub – the one thing that could be a game-changer is not in the control of the operator – reliability. It has become very apparent in the suburban West Midlands – as noted elsewhere – that congestion has rapidly become a massive issue again. If the buses are posh, with extra legroom, comfy seats and free WiFi, the journey itself is as bad as it’s ever been. There are tailbacks everywhere – some not entirely predictable either, with the end reason being simply too much traffic for no particular reason. It’s “white van man” delivering goods ordered online – which in turn means less trips to the High Street , taxis (Uber and others) and a general upturn in car traffic, possibly brought on by the feeling that petrol costs aren’t rising by much and another feeling that we might finally be seeing the end of the financial crisis that has gripped us for the best part of a decade. People are getting out and about in their private vehicles, and the bus can’t find it’s way through effectively.

It’s another reason why people like trams and trains more than buses. I’ve always been curious about the disconnect between the bus and other modes of public transport. Catch the bus and you’re one of Thatcher’s losers (if you’re 28 and still catching the bus, you’re a failure, blah blah), yet everyone loves the tram. And the train (unless you’re a Southern passenger). Much of that is surely about certainty. Railed public transport is permanent. It’s going to get you there without anything else getting in the way. You can rely on it. Buses on the other hand…

How about giving the bus it’s own permanent way? In Cambridge and Manchester to name but two, buses rank much higher on the clapometer, because of the guided busways. But these are rare incursions into an otherwise typical urban landscape. Giving the bus priority to make them more reliable and thus more attractive involves, yes – you’ve guessed it – more space on the tarmac at the expense of other road users. And for most Councillors, that’s too much of a vote risk.

One of my Facebook friends suggests Bus Users UK fielding candidates in elections to raise the profile of bus users in all of this. Good shout – except who’s footing the bill for the deposit, which may well be forfeited? It opens up even more ponderings on my journey – who is shouting for the bus user’s lot? Bus Users UK do a sterling job (disclaimer: I used to work for them), as do Transport Focus (ditto disclaimer) – but getting that into the mainstream media on a regular basis to hammer it home is nigh on impossible – because the campaign for more bus priority is, frankly, boring. And up against the army of motorists who believe that there is some sort of phony “war” against them anyway (laughable – they’ve never had it so good) – well, you might as well forget it. If National Express West Midlands had a network of routes that had buses actually beating the car drivers stuck in their little tin boxes on bus priority that had stringent fines attached for misuse, they’d be raking it in. No question.

Instead, we have on the local TV news the very day I’m writing this, a story about how bus lane cameras are bringing in thousands every week from errant motorists who are either hopeless at reading large signs or think the rules don’t apply to them and thus break them – then cry wolf to the media when the fine pops through the letter box. The story is a lazy one, and rarely changes in context. I well recall myself appearing on TV and Radio to defend such scenarios – and setting myself up as public enemy number one in the process. Furthermore on the day I write this, I hear from a friend in the industry that part of what precious bus priority there is in Wolverhampton is being removed shortly “to aid traffic flow”. This is in the City where a few years ago, a local “business leader” stood at a traffic junction one morning, pen and paper in hand, to attempt to count the number of passengers on passing buses to see if he could prove that bus priority wasn’t needed. Yes folks. It actually came to that. Across the conurbation in Coventry, we have a number of bus lanes currently suspended to see if it “helps traffic flow”. You can bet most if not all of them won’t be reinstated. What a depressing state of affairs.

I also hear from industry sources that Uber and the taxi trade are “killing” the night time bus trade in Birmingham. Maybe that’s to be expected when looking at the night time economy in some respects, but the danger is that the taxi trade and Uber in particular start making real inroads into daytime travel. Imagine something like an app offer along the lines of “3 rides for £12”. Yes, it’s still more expensive than a day ticket for the bus, but the trade off is hassle-free door to door mobility. If the economy is picking up, people may well consider ball-park prices in this way, because unless you’re a strange transport geek like me who rides about on buses to examine the science, the only real reason people catch buses is to get from A to B. If there is no real prospect of getting there any quicker on the bus, and you can drive, you’ll drive.

We don’t do long-term thinking in this country. In the 60s, when everyone was buying cars and the railways were a dead duck, no one had the foresight to think that, maybe, when everybody has bought a car, we might see mass gridlock, and railways might be needed after all. No. We sent in Dr Beeching and we all know what happened there. Today, we’ve learnt none of these lessons. We get rid of bus lanes for supposed short-term gain. Maybe even to appease the motorist, come election time. Instead, we have an impending Buses Bill that doesn’t definitively address the biggest concern of the bus industry  and it’s users – congestion. The income from concessionary fares – another huge thorn in the side of operators – isn’t mentioned. And please can we put a sock in it when some people talk about concessionary fares being a “subsidy to the bus industry” – it isn’t anything of the sort.

In the case of the NXWM “disappointing results”, I feel sorry for them. The company has tried hard to raise the image and standard of bus travel in the West Midlands. I don’t really know what more they can do or could have done. The latest role of the dice is dirt-cheap tickets for users in Dudley & Sandwell. It’s undoubtedly worth a go, but it’s papering around the edges – congestion remains the biggest killer by far.

Who knows if NX’s CEO Dean Finch will throw in the towel when it comes to the underperforming bus division? He has done with UK rail. Are buses getting in the way when there are seemingly more exciting opportunities in North America, Spain, Morocco, German rail and, of course, the iconic white coach brand? That, of course, is pure speculation – but I’ve long-thought that some parts of the “Big 5” might merge at some point.

That’s business. The hard-headed commercial reality of bus operation today. But what about the other aspects of having a well-functioning bus service?

We somehow have to get away from this idea that buses are the mode of last-resort. Now that’s much harder said than done. Today I have made a journey during the evening peak from Birmingham to Dudley. It tried the patience of even this committed bus user. Congestion was as bad as ever, someone had something loosely described as “music” emanating from a tinny mobile phone speaker, whilst another smoked something disgusting, which mingled in with the smell of what could only be described as close-to-rotting chicken. It was an appalling journey in every respect, and if I wasn’t a fine connoisseur of public transport, I’d be thinking about getting a car if I had to make that journey regularly. Which of course, would only make the congestion worse, and leave the pot-smoking, rotten-chicken-scoffing undesirables to increase in number.  We somehow need to turn this downward spiral into a virtuous circle – and it’s not easy at all.

I keep returning again and again to congestion – and the need for the bus to cut through it. The industry is probably doing all it can on their part. There are new buses everywhere, ticket deals, WiFi, posh seats, you name it. What isn’t needed are franchises and “London-style operations”, oft-spoken by local politicians who clearly don’t grasp the magnitude of what might be needed to achieve that. The Buses Bill is a side show. We have a hardy, resilient bus industry which, when paired with Local Authorities who share the same goal, can achieve great things. But we need politicians – local and national – who can see the benefit to society of the long game. To take the admittedly difficult and unpopular decisions to grant more – not less – bus priority that will see the bus whizz past stationary motorists and create a true game-changer.

How we need an extraordinary mix of Ken Livingstone, Sir Brian Souter and Mystic Meg to see us through the coming years!