I’m lurking at a draughty bus stop opposite the shiny retail heaven that is “Grand Central” in Birmingham (also contains rail station, don’t ‘cha know?). In the retail window adjacent, someone looks blankly at a scan-yourself machine. I too have a somewhat blank expression. Amongst the throngs of local bus passengers, I’m awaiting a Sn-ap coach to London, for the princely sum of a fiver. But what exactly am I looking out for?

Sn-ap is “on-demand, digital coach travel”, according to the website. “Pocket money prices” is another catchphrase. It appears that I’ve missed out on my “first journey free” offer, but a fiver is hardly going to break the bank. I’ve just paid more than that for a bacon bap and cup of tea.

It’s all about the text

Twelve hours ago, my slumber was interrupted by a text message from Sn-ap. I’d already registered my phone and verified it, and this text carried simple, clear instructions where the coach was going to pick me up, with a link to click on to show the location. Next morning, I’m at said bus shelter when the phone bleeps again. It’s “Carl from Solus Coaches”, with his coach registration number and another link to click on to track progress in live mode. Clicking on it reveals his previous movements, and what appears to be something akin to a 150mph sprint up the Aston Expressway, as the “live map” obviously speeds things up. Carl is now parked around half a mile away.

The “Sn-ap map” on your phone, showing live tracking

All this is immensely helpful and reassuring. Add to that, when he finally appears in his anonymous white coach spot on time, the only reference to Sn-ap is something relatively small in the window. You can’t miss National Express and Megabus; Sn-ap is something a little different.

Carl already has my name and details on his gadget. All I have to do is confirm my name, he nods, and I’m on. 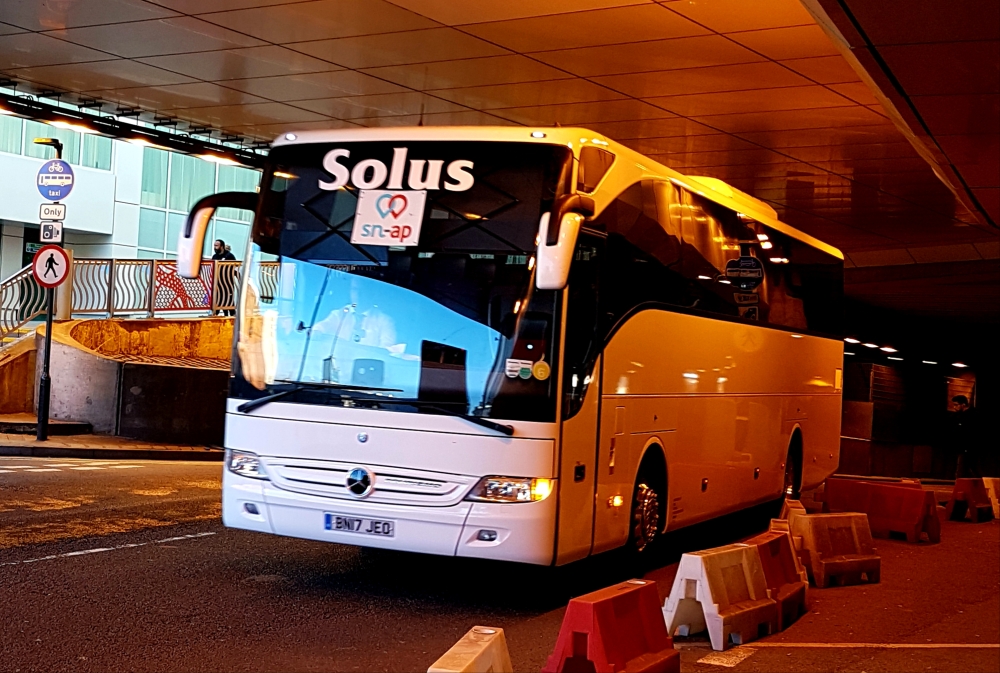 Sn-ap promises “access to premium coaches usually reserved for elite sports teams, executive travel and luxury tours”. The partners involved in Sn-ap so far certainly does read like a list of well-respected operators, with the likes of Redwing, Oxford Bus Company, Reading Buses, Astons, Johnsons, Prospect and numerous others. This Solus vehicle – a Mercedes Benz Tourismo, formerly carrying National Holidays livery, but now plain white – is very well-appointed. “Drive” by The Cars is one of several 80s hits subtly playing in the background. The legroom isn’t great (although, being 6’7”, it rarely is) and there’s no Wi-Fi/charging, but I’m being carried to our great Capital for a fiver, so I’m not complaining!

There are 9 passengers as we depart the stop. One slight concern is that the stop in question (NS3, opposite Grand Central, for those in the know) is a very busy stop, and the road is quite narrow at that point, so there’s potential for a few problems if the vehicle isn’t quickly loaded and away.

Then we’re off around some of Brum’s suburbs, picking up other Sn-appers. 1 joins in Moseley, while 3 more hop aboard in Selly Oak, so it’s a reasonably loaded trip, as we hit the M42 50 minutes after departing the City Centre.

The motorway monotony… and a sweet-treat!

The monotony of the motorway prevails. Several coaches pass on the opposite carriageway, with our driver happily reciprocating their jolly waves. It’s all very bog-standard, as motorway travel is.

As we glide into central London, a young man appears, carrying a small bag. I think maybe he’s going to ask me for a tip for the driver, in the finest traditions of coach travel’s heyday. But ,actually, no. He wants to know what I think of it all. I tell him all is very good. Lack of Wi-Fi doesn’t really bother me (and with people increasingly getting more and more data included in their phone plans, I think it will increasingly become less important), but I’d have liked to have seen a charging point. That apart, it was a fiver well-spent. He smiles and gives me a free keyring and small bag of sweeties – something I’ve experienced before on Germany’s ICE train. Maybe Sn-ap’s CEO and founder Thomas Ableman – formerly of National Express and Chiltern Railways – knows a thing or two about delighting passengers with little things like this…

My Sn-ap arrives only around 10 minutes late, given the usual appalling nature of central London traffic, and my terminus is a bus stop just opposite Euston station. I’m a satisfied virgin Sn-apper! I’m immediately asked on the text to “rate my driver” in classic Uber style, which I do, over a pint at the nearby Euston Tap.

But for the purposes of research (and the lure of cheap coach tickets) I’m back on getasnap.com to see where else I can go. This isn’t National Express. Destinations are limited, days limited and times often seemingly quite odd, but I spot one from Birmingham to Leicester on my day off from work, so I decide it’s time for another ride.
This time, I don’t get the 12-hour reminder text – it’s only 3 hours ahead. Three minutes before, I get another text as I wait in the same location. It’s “Liam from Roberts Travel Group” and he’ll be on his way shortly. Again, I can track his progress via the Sn-ap map.

And then something bizarre occurs.

I notice from the live map that Liam is actually parked up barely a few hundred metres from where I’m standing. I presume he’s about to drive around the block to pick me up, but instead, I watch with increasing incredulity as the coach joins the Aston Expressway and onto the M6!

The Sn-ap website has a contact number, so I call it, where a polite gentleman listens as I tell him my Sn-ap is hurtling down the motorway, minus me. He tells me he can see it on his tracker too. I’m apparently the only person booked on for the journey, and he apologies profusely and asks me to hold whilst he contacts the driver. A few moments later he tells me that the driver is coming off the motorway and returning to Brum to pick me up!

Around half an hour after the original departure time, Liam arrives in another very smart vehicle (a Yutong TC9) and he can’t apologise enough. There’d been a mix up over the departure location, and because the fares are so cheap, Liam explained that people sometimes don’t show up. 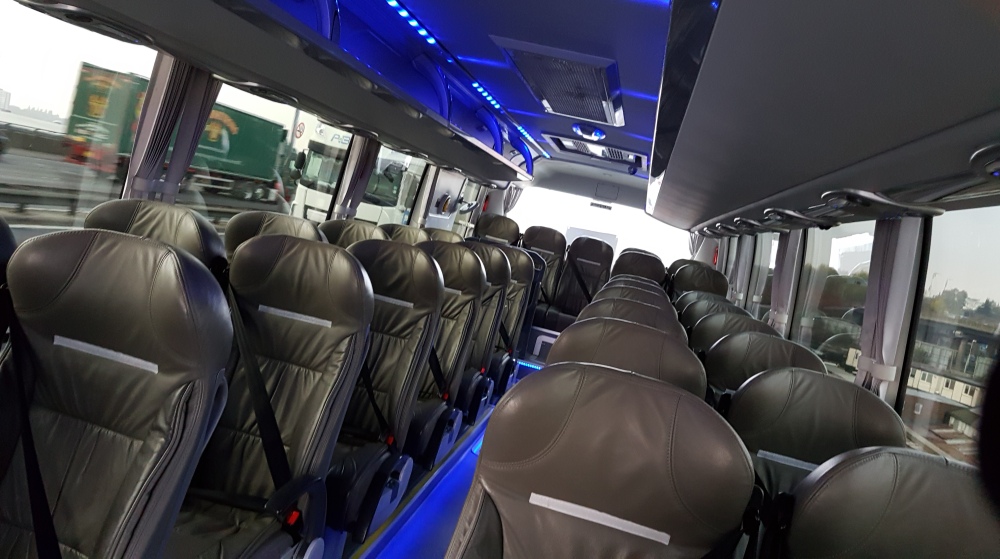 I am indeed the only user of this particular run, and Liam chats away, full of enthusiasm for Sn-ap, and for his job in general. He’s managed to turn a negative into a real positive, and he’s a real credit to both operator Roberts Travel Group and to Sn-ap. The Sn-ap control also call back to apologise again and check that I’m actually on the coach.
Arrival is at Leicester’s St. Margaret’s bus station, where Liam tells me his next trip is a schools run, and that he’d been to Scotland recently – a coach driver’s life is a varied one! He apologises again for the mix-up and I wander off into the bus station to plot my journey home, again a satisfied Sn-apper.

Sn-ap is an interesting addition to the coaching scene. Formed in 2016, it isn’t really on the mass radar – yet. But driver Liam told me that, whilst my journey was empty apart from me, he’d seen steady growth on several other journeys that he’d driven for Sn-ap. The dozen or so people on my journey from Birmingham to London – despite a huge array of rival coach and rail offerings – suggests that tech-savvy folk are becoming aware. By limiting trips to where demand really exists, rather than blanket daily timetables, cheap fares can be offered, but not at the expense of bargain-basement vehicles. I well recall the novelty of chugging down the motorway on an ancient ex-Hong Kong double decker which I’m sure never got over 40mph when Megabus first launched. My then-£1 ticket offered a certain amount of smugness compared to National Express passengers, who glided by – but had paid more. Today, passengers expect more. Cheap doesn’t have to mean basic, and while Megabus has moved on to provide much more attractive vehicles, Sn-ap is actively making the point that these super-luxury vehicles can be ridden for dirt-cheap prices a central plank of it’s marketing offer.

There is, perhaps surprisingly, no Sn-ap mobile app – but the website works perfectly for mobiles, so, like Megabus – which also doesn’t have an app in the UK – it’s not entirely essential.

The departing coach without it’s only passenger was a schoolboy error, and I’m not entirely sure what might have happened had the coach possessed more travellers – turning back to pick me up might not have been a reasonable option. But Sn-ap and Liam the driver turned this mishap around brilliantly, and I remain a very satisfied happy Sn-apper! 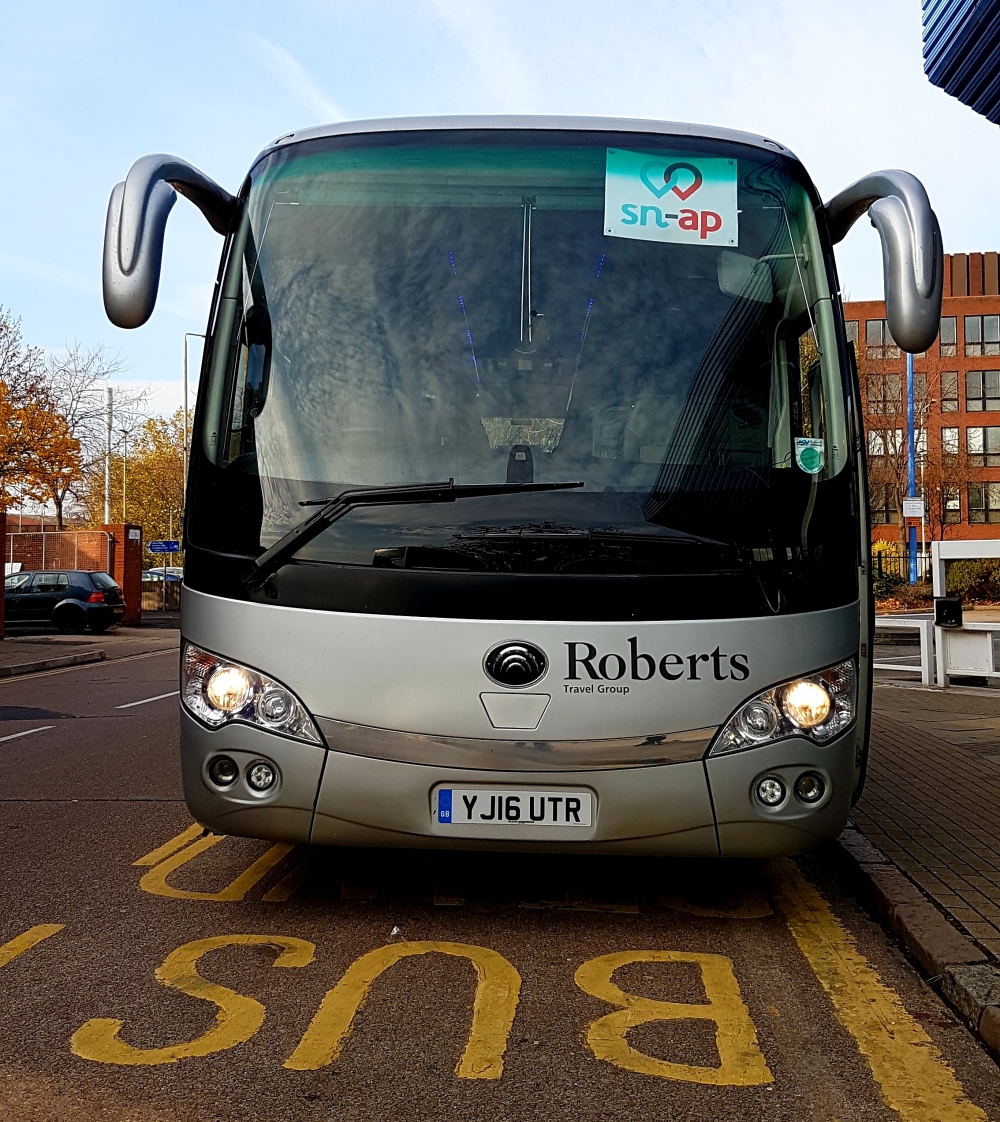